Andrew Warthen is an employee at 5th Cell and a spawnable character in Scribblenauts Unlimited.

When he is created, he will automatically spawn a randomly coloured object which he picks up and wears like a shirt. This is referencing the fact he has tons of t-shirts in real life. You can remove this from him and wear it yourself if you want.

In Scribblenauts Unmasked, he has a complete sprite change. His sprite is now a giant head of his old sprite on the robotic "legs" of Chang Tzu. Despite having a sprite similar to a villain, he is neutral. 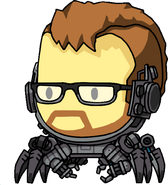 Scribblenauts Unmasked
Add a photo to this gallery

The female Andrew Warthen has a black stick-figure skier on her front. This is due to the fact that he is a snowboarder, but the artist mistook it as a skier. The skier icon was removed from the male version but not the female version.

Retrieved from "https://scribblenauts.fandom.com/wiki/Andrew_Warthen?oldid=118978"
Community content is available under CC-BY-SA unless otherwise noted.