The Beast is a huge or monstrous creature. They have brown fur, yellow horns and are large as a buffalo.

In the original Scribblenauts game the Beast was an extremely hostile creature, attacking every living creature. He is also very powerful, capable of defeating Cthulhu.

From Scribblenauts Unlimited, and later games, the Beast only attacks in self-defense. He will eat small animals (birds, cats, lizards etc), meat, organs and corpses. You can ride this creature, and be able to use his bash attack, that deals 50 points of damage, capable of killing any human in one hit. A Beast can be created by the portal. 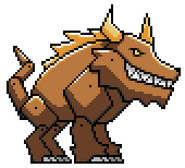 Retrieved from "https://scribblenauts.fandom.com/wiki/Beast?oldid=123423"
Community content is available under CC-BY-SA unless otherwise noted.