A death worm is a skeletal snake with a red beetle head. The head also looks like a crab's claw with an eye. It has good offensive and defensive power, and has the same actions and idle animations as a python. It scares nearly all NPCs and can defeat most monsters, even ones larger than itself.

In Super Scribblenauts, the death worm has different actions and idle animations, it now slides along the ground with its tail. The worm is also weaker, and it can be defeated by humans. 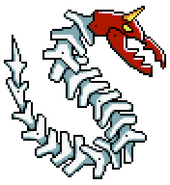 Old Sprite
Add a photo to this gallery
Retrieved from "https://scribblenauts.fandom.com/wiki/Death_worm?oldid=123433"
Community content is available under CC-BY-SA unless otherwise noted.