A dragon is a large reptilian creature that is green with red eyes. It has the ability to fly due to its wings. It can deal heavy damage and has a high defense, allowing it to take out multiple foes if necessary.

In Super Scribblenauts, It can also breathe fire at opponents from afar. This makes dragons a difficult adversary to deal with, meaning the use of guns or knights, which will automatically attack the dragon, to dispatch it. It can withstand two cannonballs.

It can only be ridden after being tamed or having a saddle placed on it. It will protect princesses, gold, and other valuable treasure objects. In Scribblenauts Unlimited, it is able to be ridden without a saddle or being tamed. Even though in mythology it breathes fire, it will be afraid of it, and cannot use it in the original Scribblenauts. 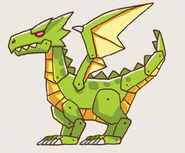 A dragon fighting a giant panda.

Dragon in Custom Mode.
Add a photo to this gallery

Retrieved from "https://scribblenauts.fandom.com/wiki/Dragon?oldid=88092"
Community content is available under CC-BY-SA unless otherwise noted.