@Cursebreakingcane is an object in Scribblenauts Unlimited that, unlike most objects using the @ symbol, appears normally ingame: it is held by Edgar when he appears after you collect 60 Starites and save Lily.

Without using the @ method it can only be obtained by stealing from Edgar and putting it in the Magic Backpack .

It functions similarly to the Medusa Head. 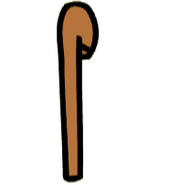 Add a photo to this gallery
Retrieved from "https://scribblenauts.fandom.com/wiki/Edgar%27s_cane?oldid=114218"
Community content is available under CC-BY-SA unless otherwise noted.