Edgar and Julie are the parents of Lily and Maxwell. Edgar was one of the greatest adventurers, but Julie would beg to differ. They always competed on every adventure they had together. On one adventure, Julie beat Edgar to the top of a long lost pyramid, but the treasure was an engagement ring, that was planted there by Edgar. Then they semi-retired to start a family. They continued having children until they eventually had forty-two children; forty-one sons and one daughter. Neither Edgar nor Julie can be spawned naturally and can only be spawned by using the "@" Method.

Edgar has a dark brown beard and mustache combo. He wears a fedora with three stubs at the top, this being his Rooster Helmet. His clothes are rather simple; he wears a brown coat and pants with a dickie in the coat.

Julie wears a rooster helmet much like Lily's, along with a beige dress and black heels. She also has blue diamond-shaped earrings, if one looks closely.

Edgar and his summoned Lily (which he turned into stone)

Julie with a gray rooster hat 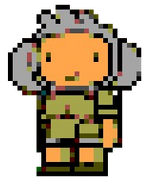 A comparison of Lily and Julie

A photo from Scribblenauts Unlimited
Add a photo to this gallery
Retrieved from "https://scribblenauts.fandom.com/wiki/Edgar_and_Julie?oldid=125753"
Community content is available under CC-BY-SA unless otherwise noted.