Start a Wiki
The Force Field is an invisible barrier of exerted strength or impetus, specially in science fiction.

There are possible ways that NPCs can surpass the electromagnetic force such as by the combination of fast speed and flight, while Maxwell only needs normal flight. This object can't deflect particles, such as puddles, dirt, mercury etc.

Like the air vent, it can be used to push objects away. Adding a Strong or Weak adjective will not affect its electromagnetic force. It affects its defense and offense. 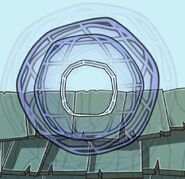 The electromagnetic field created by the force field.
Add a photo to this gallery
Retrieved from "https://scribblenauts.fandom.com/wiki/Force_Field?oldid=114433"
Community content is available under CC-BY-SA unless otherwise noted.