Giant Enemy Crab is giant arthropod in Scribblenauts. It resembles a giant crab, though it has two glowing eyes.

Giant Enemy Crab and its synonyms come from a video from E3 2006 where the video game Genji: Days Of the Blade for PS3 is being presented. While the presenter is talking about how the game is based on Japanese history, a giant crab appears on screen. He then says that it's a "giant enemy crab", and you have to flip it over and shoot its weak point for massive damage.

If it is not hostile, it is rideable and can be used to attack. Most people will run away in fear of it. The giant enemy crab will defend a normal crab and ninjas, however, they will not do the same for it.

In Super Scribblenauts, Giant Enemy Crab is not hostile, despite having "enemy" in its name.

In Scribblenauts Unmasked, Doppleganger has his own called the Crabmongus.

Riding one in Scribblenauts and using a flamethrower will cause you to fly up backwards, because the flamethrower is pointing downward and the flames will hit anything, including the crab. 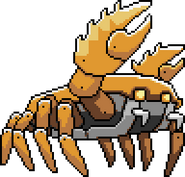 In a Scribblenauts Unmasked screenshot
Add a photo to this gallery