Harleen Quinzel was a psychiatrist at Arkham Asylum who fell in love with the arch-nemesis of Batman, the Joker. Willing to do anything to be with the Clown Prince of Crime, Harleen took the name "Harley Quinn" and became the accomplice of the mad criminal.

For information about the Harley Quinn Costume, see here.

Harley Quinn will fight any superheroes that spawn nearby, although she will not fight any fellow members of the Suicide Squad. If Harley is near the Joker, she will express her love for him and will fight alongside the Clown Prince of Crime. Harley's melee fighting abilities include hand-to-hand combat, but she will also wield a colorful mallet to battle. At long-range, she will utilize a gun to shoot enemies. 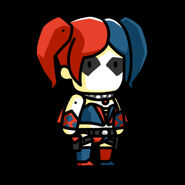 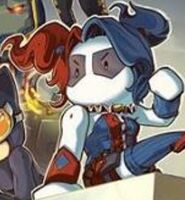 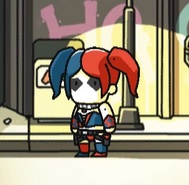 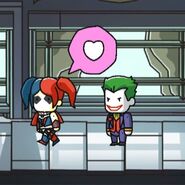 Harley shows her love for Joker. 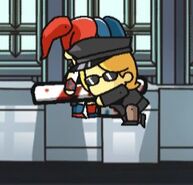 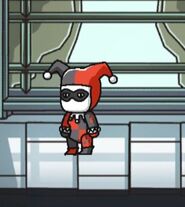 Harley Quinn's original costume.
Add a photo to this gallery

Retrieved from "https://scribblenauts.fandom.com/wiki/Harley_Quinn?oldid=112096"
Community content is available under CC-BY-SA unless otherwise noted.