Start a Wiki
The Kangaroo is a large plant-eating marsupial with a long powerful tail and strongly developed hind limbs that enable it to travel by leaping, found only in Australia and New Guinea.

Kangaroos are neutral creatures, only attacking in self-defense. Their bash attack deals 35 points of damage, capable of defeating a man in two hits. The attack animation shows them leaning back to balance on their tail.

They have 80 health points, needing two gun shots to defeat one. They seem to only eat lettuces. This animal can be ridden without a saddle. They are protective towards joeys, becoming hostile if you attack one.

Kangaroos in the Scribblenauts series are silent, despite them being able to make a wide range of sounds in real life. 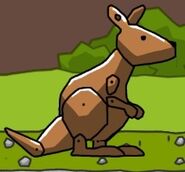 in Scribblenauts Remix
Add a photo to this gallery
Retrieved from "https://scribblenauts.fandom.com/wiki/Kangaroo?oldid=121027"
Community content is available under CC-BY-SA unless otherwise noted.