The Katana is a Japanese sword used by samurais during the feudal period in Japan. This weapon does more damage than the regular sword in all games. 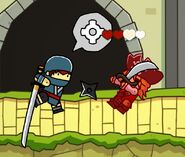 A ninja spawning a katana during a fight with a pirate.

The sprite used in the original Scribblenauts.

A samurai equipping a katana.
Add a photo to this gallery

Retrieved from "https://scribblenauts.fandom.com/wiki/Katana?oldid=113904"
Community content is available under CC-BY-SA unless otherwise noted.