The League of Mad Scientists is a villainous group that made its first appearance in Scribblenauts Unlimited. They are also refered to as the League of Evil Scientists. They appear in the Lost Kingdom of Parentheses in the level Unsunken City and also in the Syntax Station in the level Space Station Infiltration.

The following members are who comprised the team that launched the Unsunken City plan.

The following members are who comprised the team that guarded the space station when Maxwell arrived.

They only seemed to have hatched one evil plot in particular. They may have been planning something else from the Syntax Station, but it is uncertain.

Unsunken City: For some unknown reason, they drained the ocean, leaving its inhabitants, including a cherubfish, a clownfish and a mermaid, close to death. They used a colossal drain to pull off the scheme. Destroying it will allow the water to flood back into the ocean and save its inhabitants. 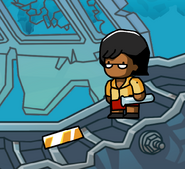 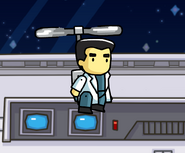 Cyborg in Space Station Infiltration
Add a photo to this gallery

Retrieved from "https://scribblenauts.fandom.com/wiki/League_of_Mad_Scientists?oldid=86484"
Community content is available under CC-BY-SA unless otherwise noted.