In Scribblenauts Unlimited, Lily has been petrified by an old man that Maxwell had tricked. She stands in the barn slowly turning to stone, until being saved and becoming an avatar after obtaining 60 Starites. You can play with Lily after ending the story mode.

In Scribblenauts Unmasked, she was immaturely arguing over which comic book character would win over in a fight with Maxwell. Finally, to decide, Maxwell rips out a page from his notebook, and writes Gotham City on it, and touches the piece of paper to Lily's Globe. Therefore, they went to Gotham City and Lily's Globe broke.

Lily wears a pink Rooster Helmet that covers her head and her pigtails. It resembles her mother Julie’s helmet and is also very similar to Maxwell's (except pink). As seen in the My Scribblenaut customization menu in Scribblenauts Showdown , her hair is styled into pigtails, and the top of her hair resembles the bumps on her Rooster Helmet. Her hair color is unknown. She also wears a blue shirt (in game) or blue Tank Top (artwork) with a star on the center. She carries a brown bag and wears a pink skirt and blue shoes with pink socks. If you look closely in the artwork, you will see that she has mascara to enhance her eyes. When she is first cursed, she seems normal but immobile. She then (slowly, as the game progresses) turns to stone, before returning to normal at the end. 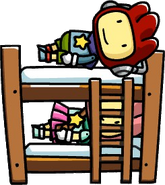 lily and maxwell on the bunk bed

Add a photo to this gallery
Retrieved from "https://scribblenauts.fandom.com/wiki/Lily_(character)?oldid=118971"
Community content is available under CC-BY-SA unless otherwise noted.