The Man is an NPC in Scribblenauts and Super Scribblenauts. He is one of the most common NPCs and is often used in levels to solve puzzles. He will eat any type of food, and after eating fatty foods (such as pizza) he will grow in size. Eventually he will grow to the largest size possible (Obese). If he eats any more food, he will take damage. This is also the same with sugary foods, such as candy, except he will become Cavitied. In Unlimited, the appearances will vary.

There are five character models for a generic man in Scribblenauts Unlimited. 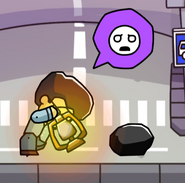 this is a flaming man
Add a photo to this gallery
Retrieved from "https://scribblenauts.fandom.com/wiki/Man?oldid=111791"
Community content is available under CC-BY-SA unless otherwise noted.