Manticore is a lion with a scorpion tail and red wings. It comes from Greek mythology. In-game it is not very powerful and can fly. It is different from the average lion in color, as well as the ability to fly. It can be tamed and ridden. Also, it will sometimes flee from other monsters. It is odd that this creature is weak because in the mythology from which it originates, it is supposed to be very fierce. It originated in Persian Myths and was taken on in Greek Myths.

A Manticore clashes with a Gryphon. 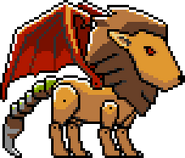 Old sprite.
Add a photo to this gallery

Retrieved from "https://scribblenauts.fandom.com/wiki/Manticore?oldid=103096"
Community content is available under CC-BY-SA unless otherwise noted.