Start a Wiki
Maxwell's Notebook is a green notebook with a Starite on it.

Maxwell's Notebook is one of the many Easter eggs that were available in Super Scribblenauts and from then on. When any object, person, or animal, (assuming that it can pick things up) as well as Maxwell pick this Notebook up, they can summon any random object, not to mention, the said object can receive additional adjectives applied to it as well, being chosen randomly. The Doppelganger will spawn equipping this object. Because it's considered a weapon, fathers and pacifist objects will attack it. Evil people will also equip it, but they won't use it.

Maxwell's notebook as it appears in the Scribblenauts Unlimited interface 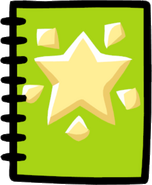 Retrieved from "https://scribblenauts.fandom.com/wiki/Maxwell%27s_notebook?oldid=114457"
Community content is available under CC-BY-SA unless otherwise noted.