The Moose is a large deer with palmate antlers, a sloping back, and a growth of skin hanging from the neck. It is native to northern Eurasia and northern North America.

Moose are neutral creatures, only attacking in self-defense. Their bash attack deals 30 points of damage, capable of defeating a man with two hits. You can ride this creature without using a saddle. They have 80 health points, taking two gun shots to defeat one.

Moose will eat small plants and lettuce. When defeated, the moose will drop a venison. They are protective towards moose calves, becoming hostile if you attack one. 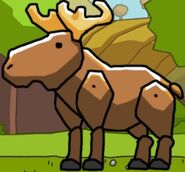 in Scribblenauts Remix
Add a photo to this gallery
Retrieved from "https://scribblenauts.fandom.com/wiki/Moose?oldid=126644"
Community content is available under CC-BY-SA unless otherwise noted.