Mothman is based on an urban legend of the Mothman of West Virginia, a strange creature described as a grey man with wings, that supposedly terrorized an area near West Virginia Ordinance Works from during 1966 and 1967. It supposedly even collapsed a bridge, killing 42 people. In Scribblenauts it is aggressive but in Super Scribblenauts it is peaceful. It is slightly taller than Maxwell. It has a weak attack but it seems to be more powerful when walking than flying. Humans are scared of it but will not attack it, wheras it will only attack if provoked. In Scribblenauts, the Mothman attacks everything it sees. The mothman can be a pesky enemy when the player is ill-prepared or does not have time to defeat it. The quickest and easiest way to defeat a mothman is by dropping/throwing a mothball at it, instantly defeating the mothman. 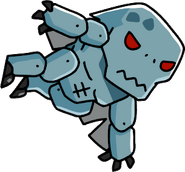 Mothman flying with arms extended.
Add a photo to this gallery
Retrieved from "https://scribblenauts.fandom.com/wiki/Mothman?oldid=123415"
Community content is available under CC-BY-SA unless otherwise noted.