In the object editor, users can type in objects from which they can extract pieces, or they can use the many pieces suggested by the game:

(Note: All pieces of specific people use their images from Super Scribblenauts.)

The game offers a great number of colors and textures to personalize items. These mimic the effect of appearance adjectives used on specific object pieces.

Many colors are available, and are highly modifiable in terms of saturation and

Behaviors tell alive objects how to react to certain object types. If you type an object's name, you will get a list of types that object belongs to: For example, Apple belongs to 'Food', 'Fruit', 'Classroom', and several others.

The most complex section of the editor by far, the script editor lets you add some complex effects to your creation.

The Hero Creator is mode in Scribblenauts Unmasked and is a improved version of the Object Editor from Scribblenauts Unlimited. It allows players to create their own Superheroes or Villains by using other pieces of Objects or just Objects that is in Scribblenauts Unmasked. It also allows players to add powers and abilities of DC comics characters to their custom object. For an example, you can use Green Lantern (Hal Jordan) as your Base Object, then you can delete his Head and Arms and replace them with Batman's Head and Arms, then color Batman's Mask Green and his Gloves Green, then just save the Object and name it something like: "Green Lantern Batman" (or, for more hardcore fans, "In Darkest Knight Batman"). You can also Share your Objects by Uploading them to Steam/Online. The Hero Creator is not in the 3DS Version of the game, like the Object Editor in Unlimited.

The Avatar editor in Unmasked is fairly like the Hero Creator, minus the Behaviors and stuff.

The end result can then be summoned in play by use of a custom word.

You can use color editing to make pretty good recolors! 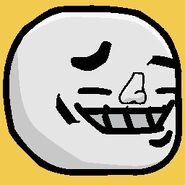 Here's a finished masterpiece! It's the Trolface!

Steve, a character created by Geoff Johns to demonstrate how the Scribblenauts Unmasked hero creator works

Steve after jim lee ruined him

A real-life hypercar recreated using the object editor. (This greatly exceeds the game's stamp limit, so you cannot normally recreate this unless you use glitches)
Add a photo to this gallery

Retrieved from "https://scribblenauts.fandom.com/wiki/Object_editor?oldid=120487"
Community content is available under CC-BY-SA unless otherwise noted.