This article doesn't have an image. You can help Scribblenauts Wiki by uploading one.

Punctuation Plaza, also known as Mall (Unused Level for PC) is an Wii U exclusive area in Scribblenauts Unlimited .

It acts mainly as a store where people may download other players' creations . The player can also download their own custom creations to the store as well. Stores consist of a name, a painted design, and an avatar, as well as windows which display 4 seemingly random objects from said shop. Each shop has a limit of 32 custom objects, each with up to 5 tags, and a rating system.

(to do: figure out how the rating system works. Is it an average, or what?)

Although it appears exclusively in Wii U. It also appears in PC as well, in an unused data. It was cut presumably very late into development, as it can be found in late promotional work.

Unlike the Stadium level, only the collision and the background of the map work, there are no merits or missions. 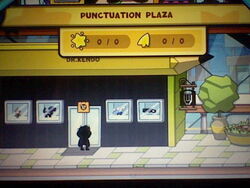 Retrieved from "https://scribblenauts.fandom.com/wiki/Punctuation_Plaza?oldid=88067"
Community content is available under CC-BY-SA unless otherwise noted.