Red magic is a damaging form of magic.

Red magic appears as a small, sparkling ball of red energy. In most games, it uses a recolored version of magic’s sprite and/or particle effect.

From Scribblenauts Unlimited onward, it has no visible sprite, but it generates a swirling magic particle effect whenever it moves. This makes it appear as a swirling ball of magic while in motion, but the lack of a sprite can still be seen when it is selected or summoned by the player.

In Scribblenauts, red magic can be summoned through the notebook by normal means.

Like all forms of magic, it is not available in Super Scribblenauts. However, the fireball object in said game has the same effect as red magic.

In Scribblenauts Unlimited, red magic can only be summoned by entering "@red magic" via the '@' method. 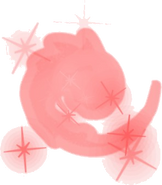 Retrieved from "https://scribblenauts.fandom.com/wiki/Red_Magic?oldid=125825"
Community content is available under CC-BY-SA unless otherwise noted.