The Robosaur is a mechanical T-rex, but it is slightly tougher than one. When it touches water, it will be paralyzed, and it will interact with other electrical devices. The Robosaur has the same attack power as an unarmed Cole, making it quite powerful. This is one of the three objects based off of the T-Rex, the others being Edison and Fossil.

This was used by Doppelganger in the first story mission of Scribblenauts Unmasked. 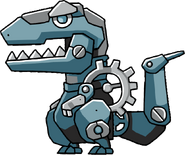 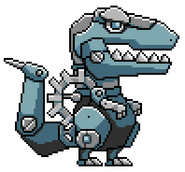