Scribblenauts is the predessor of Super Scribblenauts. It is a Nintendo DS game, developed by 5th Cell and published by Warner Bros. Interactive Entertainment. It was released on North America by September 15, 2009, Australia by September 30, 2009 and Europe by October 9, 2009. Konami released the game in Japan under the name Flash Puzzle: Maxwell's Mysterious Notebook (ヒラメキパズル マックスウェルの不思議なノート, Hirameki Pazuru: Makkusuueru no Fushigi na Nōto) on January 27, 2011. The Japanese version adds a few new objects (like Alucard), as well as improving the controls so Maxwell stops when the stylus is released.

The game grants the player the ability to summon any object and use it to solve puzzles. Thousands upon thousands of items are available in the game, and they can be automatically summoned by typing them in Maxwell's Notebook via the keyboard or writing it out, which was cut out for the later games due to the difficulty of such.

Scribblenauts has a gameplay completely unique to it and its successors. When the player writes an object into his journal/notebook, the object will appear on the screen. Over 20,000 known objects exist. The only thing that limits creativity is the Par System (though it can be nullified with some glitches) and ethnic, vulgar, or ESRB-restricted words. Maxwell, the hero, moves with the stylus and the camera with D-pad and A B X Y buttons. The main gameplay mode, Challenge Mode, has 240 levels and Starites, split evenly between Action and Puzzle levels. Puzzle levels require objects to be made in order to make the Starite appear, and Action levels require Maxwell to just get to the Starite. After completing a level, Maxwell recieves Ollars, the game's currency. Maxwell can use these Ollars to buy music, avatars and new areas.

Another gameplay mode in Scribblenauts is the ability to create custom levels. The player takes the layout of a levels from the Challenge Mode, then creates objects and the Starite. Objects can be programmed to interact in a way with only 1 other object (i.e 'This object eats...). This approach is rather limited, but levels can be uploaded and downloaded online (it requires friend codes and DS Wireless Communication).

Scribblenauts was thought up by Jeremiah. He originally wanted to make a game where the player wrote a sentence and it appeared on screen, but thought it was too dull. He advanced his idea into what Scribblenauts is now, in which you write a word and use the object that you created to solve puzzles. A total of 15 people worked on the game, with 5 of them spending six months going through a dictionary and creating the Objectnaut, a database of objects. This lets them create an object using simple 3D geometric shapes so they didn't need to draw sprites and animations for everything, and assign properties that decide how the object acts in the game when reacting with different things. 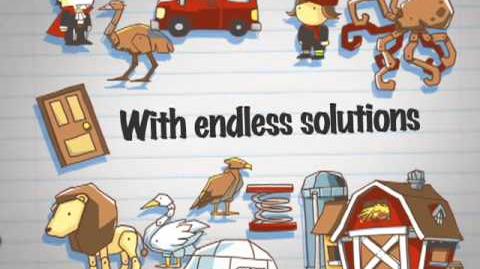 SCRIBBLENAUTS Trailer
Add a photo to this gallery

Retrieved from "https://scribblenauts.fandom.com/wiki/Scribblenauts_(video_game)?oldid=115959"
Community content is available under CC-BY-SA unless otherwise noted.