After the cancellation of Scribblenauts: Fighting Words, developer 5th Cell announced heavy layoffs, downsizing the company to a fraction of its former size. As such, Scribblenauts Showdown is being developed by Shiver Entertainment, the first game in the series to be developed by a studio other than 5th Cell. 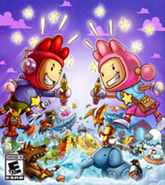