Start a Wiki
Welcome to Scribblenauts Wiki!
Scribblenauts Wiki is about the Scribblenauts series that anyone can edit!
This wiki has 7,694 articles, growing since 7 June 2009, before the first Scribblenaut game's official release!
Feel free to visit our new Administrator's Board for some new topics and polls! 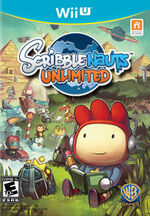 Contribute to this wiki

To write a new article, just enter the article title in the box below.

Not sure where to start?

Retrieved from "https://scribblenauts.fandom.com/wiki/Scribblenauts_Wiki?oldid=70282"
Community content is available under CC-BY-SA unless otherwise noted.