Starites are small, star-like objects with 5 points. It is the dream of Maxwell to collect these rare objects.

A Starite can be manipulated, either to make obtaining it easier or harder. For example, a Starite will roll if pushed and can be attatched to things using rope-like objects. However, a Starite can also be blown up, burnt or lost down a hole. Many "action" stages see Maxwell trying to avoid breaking or dropping the Starite in some way. It is mainly threatened by steel balls, pits, and spikes, which instantly break it.

Typing "Starite" or any of its synonyms will give you a fake one that doesn't sparkle. However, in the Level Editor, you get a choice to spawn a real one as the goal. Also, in Wii U/PC versions of Scribblenauts Unlimited, it can be spawned using "$" objects or @ objects.

New to Scribblenauts Unlimited, Starite Shards are pieces of starites. They are scattered across the planet. There are 400 shard quests and 10 shards make a starite, so that makes 40 starites made from shards. These shards are obtainable by either helping people with errands that requires you to use the notebook, or by the object shards which spawns when you complete one of the categories for them.

In Scribblenauts Unlimited, if you attach a rope to a Starite and put the rope in the magic backpack, you will put both the starite and the rope in. This can be used to instantly complete levels.If you grab the starite outside the level, the Starite will get the music and the animation to play, but no Starite Get Screen will show up and the game will be softlocked. 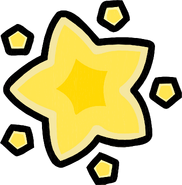 Concept art of a Starite

The animation of a starite as seen in level 10-5

a starite shard
Add a photo to this gallery
Retrieved from "https://scribblenauts.fandom.com/wiki/Starite?oldid=108176"
Community content is available under CC-BY-SA unless otherwise noted.