Superman real name Kal-El, also known as Clark Kent; is a superhero and a member of the Justice League. He is a spawn-able NPC in Scribblenauts Unmasked. In the game, he can Fly, Shoot Laser Vision, Shoot Frost Breath and is super strong, he will also fight Villains or any other type of bad guy. He can only be harmed when near Kryptonite, at which point he will become Glowing and take damage like other NPCs.

Faster than a speeding bullet, Superman is the world's most powerful superhero. A native of the planet Krypton, The Man of Steel came to Earth as a child, where he was raised by human parents, the yellow sun if our solar system gives him incredible powers, including super strength, flight, heat vision, and super hearing. An advocate of truth, justice, and the American way. Superman disguises himself as reporter Clark Kent, in order to live among the people he protects. The protector of metropolis, Superman is a member of the Justice League, and is an inspiration to young and old alike.

Here is a list of known variants (Please note that all variants ARE NOT added):

Maxwell first meets Superman in Metropolis, where he will introduce himself. Superman will say that he saw Doppelganger working with Lex Luthor and that their evil deeds can be seen all around the world. After the explanation, Lily will explain how to use her Globe, and you can move to the next level.

Superman appears again in the main Metropolis mission, where he is asking help from Maxwell in rescuing Lois Lane and Jimmy Olsen from Metallo. When they are rescued, Superman and Maxwell go to Lexcorp where they discover that Doppelganger gave Kryptonians powers to Lex Luthor, making him a match to Superman. Maxwell helps in battle, giving protective clothing to Superman, and spawning the Kryptonian's weakness, Kryptonite. Before Lex and Doppelganger can say what is their evil plan, they are teleported by a mysterious figure, letting the Starite behind. 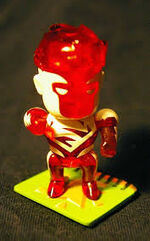 A Toy/Model of Superman Red.