The Tilt Rotor is a propeller-driven aircraft that can take off vertically, similar to a helicopter.

Also the Tilt Rotor have a weak defense. 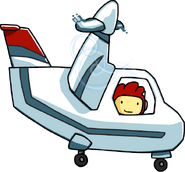 Tilt Rotor in use.
Add a photo to this gallery
Retrieved from "https://scribblenauts.fandom.com/wiki/Tilt_Rotor?oldid=102697"
Community content is available under CC-BY-SA unless otherwise noted.