The Whale is a a very large marine mammal with a streamlined hairless body, a horizontal tail fin, and a blowhole on top of the head for breathing.

They are neutral creatures, that only attack in self-defense. They have 80 health points and their bash attack deals 30 points of damage. They will randomly shoot water from their blowhole. You can ride this creature without a saddle.

Whales are carnivorous, they will eat small fishes, shrimps and krill. They are protective towards whale calves, becoming hostile if you attack one. They will run away from the whaler and the aquarium. If it is placed next to an aquarium, it will attack and destroy it. 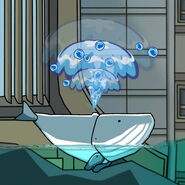 A whale shooting water.
Add a photo to this gallery
Retrieved from "https://scribblenauts.fandom.com/wiki/Whale?oldid=118754"
Community content is available under CC-BY-SA unless otherwise noted.